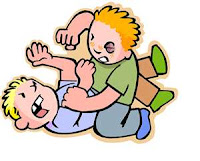 Sibling abuse is the physical, emotional or sexual abuse of one sibling by another. The physical abuse can range from more mild forms of aggression between siblings (e.g., pushing and shoving) to very violent behavior (e.g., using weapons). Often moms and dads don’t see the abuse for what it is.

As a rule, parents and society expect fights and aggression among brothers and sisters. Because of this, parents often don’t see sibling abuse as a problem until serious harm occurs. Besides the direct dangers of sibling abuse, the abuse can cause all kinds of long-term problems on into adulthood.

Research shows that violence between siblings is quite common. In fact, it is probably even more common than child abuse (by parents) or spouse abuse. The most violent members of American families are the kids.  Experts estimate that three kids in 100 are dangerously violent toward a brother or sister.

One study puts the number of assaults each year to kids by a sibling at about 35 per 100 children.  The same study found the rate to be similar across income levels and racial and ethnic groups. Likewise, many researchers have estimated sibling incest to be much more common than parent-child incest. It seems that when abusive acts occur between siblings, family members often don’t see it as abuse.

Some possible signs of sibling abuse are:

We need more research to find out exactly how and why sibling abuse happens. Experts think there are a number of possible risk factors.

How can you prevent abuse from taking place between your kids?

1.    Create a family atmosphere where everyone feels at ease talking about sexual issues and problems.

2.    Don't give your older kids too much responsibility for your younger children. Instead, use after-school care programs, rather than leaving older kids in charge of younger ones after school.

3.    Keep an eye on your children’ media choices (e.g., TV, video games, and Internet surfing), and either join in and then discuss the media messages or ban the poor choices.

4.    Know when to intervene in your children’ conflicts, to prevent an escalation to abuse.

8.    Reduce the rivalries between your kids.

9.    Set aside time regularly to talk with your kids one-on-one, especially after they've been alone together.

10.    Set ground rules to prevent emotional abuse, and stick to them (e.g., make it clear you will not put up with name-calling, teasing, belittling, intimidating, provoking, etc.).

When one sibling hits, bites, or physically tortures his/her sibling, the normal rivalry has become abuse. You can't let this dangerous behavior continue. Here's what to do:

1.    After a cooling off period, bring all the children involved into a family meeting.

2.    Brainstorm many possible solutions to the problem, and ways to reach the goal.

3.    Continue to watch closely your children' contacts in the future.

4.    Gather information on facts and feelings.

5.    Help the children work together to set a positive goal (e.g., they will separate themselves and take time to cool off when they start arguing).

6.    Help your children learn how to manage their anger.

7.    Make sure you don't ignore, blame, or punish the victim—while at the same time, not playing favorites.

8.    Make your expectations and the family rules very clear.

9.    State the problem as you understand it.

10.    Talk together about the list of solutions and pick the ones that are best for everyone.

11.    Whenever violence occurs between kids, separate them.

12.    Write up a contract together that states the rights and responsibilities of each youngster. Include a list of expected behavior, and consequences for breaking the code of conduct.

In the last few years, more researchers have looked at the lasting effects of early experiences with siblings. Brothers and sisters can have strong, long-lasting effects on one another's emotional development as grown-ups.

Research indicates that the long-term effects of surviving sibling abuse can include:

Even less extreme, sibling rivalry during childhood can create insecurity and poor self-image in adulthood. Sibling conflict does not have to be physically violent to take a long-lasting emotional toll. Emotional abuse, which includes teasing, name-calling, and isolation can also do long-term damage. The abuser is also at risk for future violent or abusive relationships (e.g., dating violence, domestic violence, etc.).